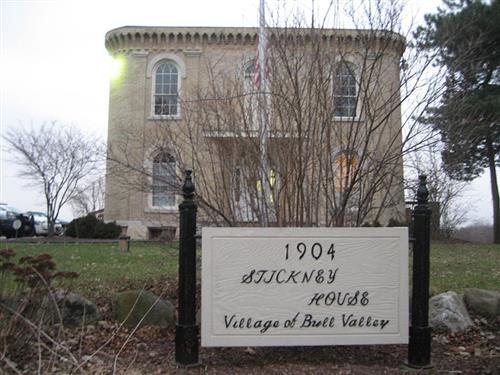 This structure is listed on the National Register of Historic Places. The house has a bizarre design according to many because it was done based on George Stickney's belief in spiritualism. It is located off a beaten path that is very much secluded along a deserted highway. The house was built in the 1800's for accomplished mediums George and Sylvia Stickney.

The two-story house had a ballroom on the second floor that ran the full length of the building. No square corners were allowed for the house design as it was believed spirits had a tendency to get stuck in corners, but due to error one corner of the home did have a 90-degree measurement. When Mr. Stickney discovered the flaw, it eventually led to his death by an evil spirit many believe. Mr. Stickeney was discovered one day dead, slumped over on the floor in the corner of the home that had the design flaw.

After the death of Mr. Stickney, Mrs. Stickney grew fame as a spirit medium. People came from far away places to make contact with ghosts at the house. While it started off as a place for spiritualistic activities, it later became known as a place for devil worshippers when the property switched hands. Spirits good and evil are believed to continue to linger here while it now houses the local police department.