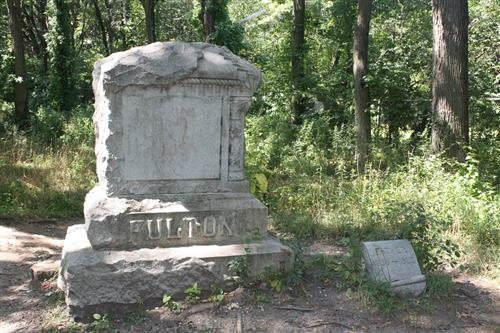 Located on the outskirts of Chicago, this cemetery is believed to be one of the most haunted places in the region. Over the years, many have reported accounts of paranormal phenomena occurring - some go back to the 1800s.

At one time the area was much like a park where you could fish and swim in an adjacent pond. Picnics would also be held under the trees. Things started to change when a nearby road was closed and as it became more and more isolated, so did the result of vandalism and decay. Gravestones were knocked over, spray painted on, and in some cases broken or stolen. Some say graves were even opened and caskets were removed, which many believe led to the area becoming haunted. Others believe it was the result of some using the area for black magic and occult activities.

Those who have reported of paranormal activity include seeing a ghostly female figure sitting on a tombstone and an apparition of a horse emerging from the pond pulling a plow with an old man on it. At the nearby Midlothian Turnpike, some have seen ghost cars appearing and vanishing. The cemetery now appears abandoned and covered in woods with a "No Trespassing" sign, but many have managed to gain access through a hole that's been left in the fence by trespassers.