Midnight Terror in Oak Lawn Returns with Double the Dread 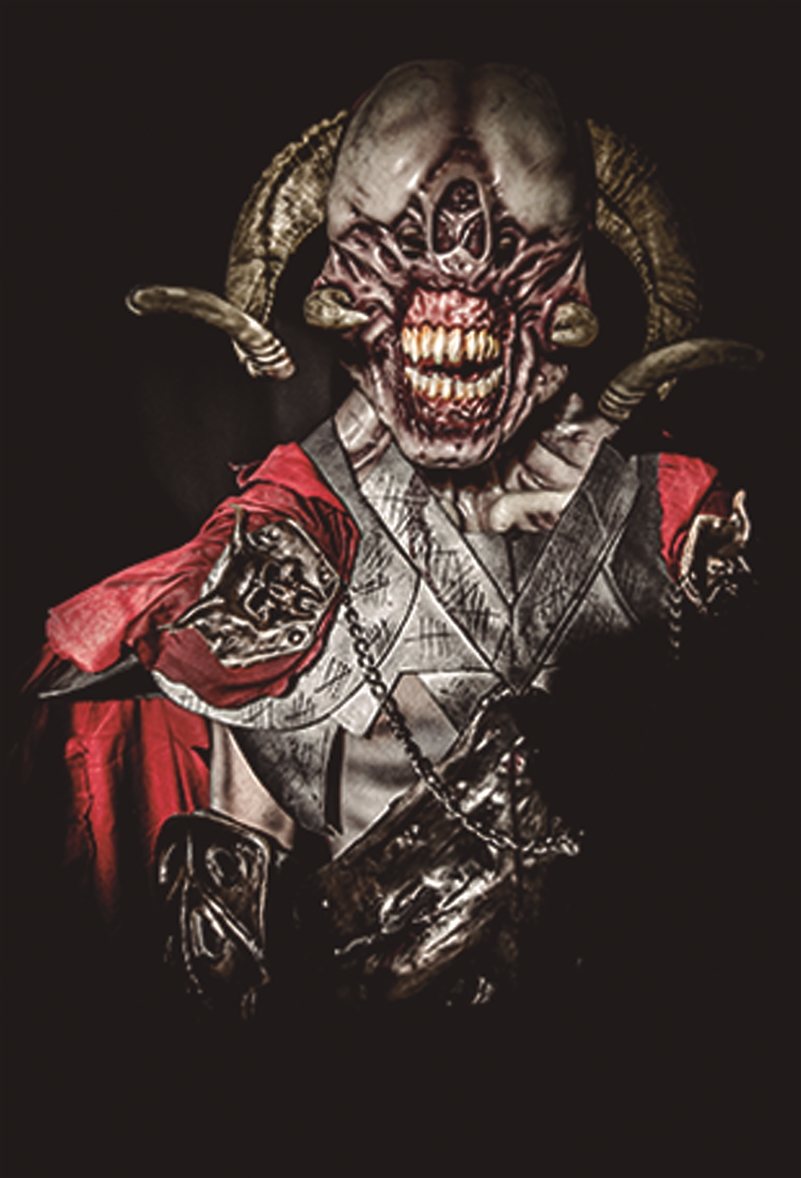 Malum is a demonic dream-haunting overlord who runs a fiendish factory, one of two attractions included with admission at Midnight Terror
Photo by: Midnight Terror

Midnight Terror Haunted House made a big splash in 2014 when it debuted as Oak Lawn's first ever commercial haunted attraction. Now, it's preparing to awe visitors with an all-new frightfully fun attraction that's at least twice as large as last year's. In fact, the site now hosts two uniquely themed haunted houses deviously designed to terrify patrons: (1) Factory of Malum and (2) Blackwood Hospital, both included with the price of admission.

Inspired by rave reviews and an even better-than-expected turnout (over 9,000 customers) last October, Midnight Terror creator/co-owner and Oak Lawn native Justin Cerniuk refused to rest on his laurels or repeat the same haunt. So last November, as soon as his inaugural attraction closed, he went back to the drawing board and began plans for a completely different and expanded Midnight Terror attraction for 2015. Working closely with village officials, Cerniuk and co-owners Robert Page, Maciej Kulawiak and Mark Krupa earned approval to expand their attraction's footprint beyond the boundaries of the 4,000-square-foot Beatty Lumber warehouse that shelters the walk-through portion of their haunt.

"Now, I get to fulfill a longtime dream of mine - hosting two haunted houses on one site and enhancing the experience for visitors with a greater level of detail and sensory stimuli," says Cerniuk, a former Marine who served in Iraq and Afghanistan during combat operations there. "This year, we created fresh sets, animatronics and props as well as a whole new mythology, backstory and cast of characters that mesh with the themes we've built into this two-in-one attraction."

Visitors first enter the Factory of Malum, the nightmarish industrial headquarters of a demonic dream-haunting overlord named Malum, who has transformed his workshop's rooms and corridors into architectural manifestations of your worst fears and phobias. As you wind helplessly through Malum's labyrinth, you come face-to-face with a menagerie of scary simulations, including grotesque insects, snakes, rats, living dolls, sparking electrical hazards, fire-scorched clowns, pitch-black passages, and claustrophobia-inducing narrowed hallways. Accompanying you on this excursion into fear are fellow factory worker fiends who mercilessly shriek, stalk and surprise at virtually every turn.

But your tour of the terrifying doesn't end there. Next, your mission is to avoid becoming an inpatient at Blackwood Hospital, the warped wards of which you'll walk warily through in the hopes of being discharged without being dismembered. It's awfully convenient that a medical center is adjacent to Malum's factory, but it's awfully creepy that the hospital beds, surgical tables, and padded cells are occupied by mangled, possessed, and deranged factory employees under the care of the sadistic physician Dr. Blackwood and gnarly nurses who belong in hearses. Souls fortunate enough to escape Blackwood's confines must lastly brave an outdoor home stretch better known as "Chainsaw Alley" before they can taste freedom.

Yes, it's safe to say that Cerniuk and crew had a busy off-season.

"We had so many great ideas for a bigger and better haunted attraction that are now being realized," says Cerniuk, who plans to keep MidnightTerror within Oak Lawn and improve it every year. "Staging this on a bigger scale also meant growing our staff, delegating responsibilities and dramatically increasing our budget." Consequently, the 2015 edition of Midnight Terror includes:
-More than 30 rooms - 15 more than last year - as well as a new outdoor section.
-70 actors - 50 more than 2014 - each a distinctive character with a custom costume and makeup.
-The guidance of experienced haunt industry professionals, among them veteran set detailer Dan Haynes and actor trainer John Shankel (who choreographs the scarers' actions).
-A brand new LED lighting system and improved sound system.
-Hollywood-style CGI effects, including monitors displaying monstrous footage.
-Free entertainment for guests waiting in line - from DJs to stilt walkers to street drummers.

Additionally, visitors can benefit from special promotions, some involving partnerships with community organizations, including:
-Half off regular admission (a $9 value) on opening night, October 1.
-Ladies get $5 off on October 8.
-Students with a school ID get $3 off on October 11.
-Buy one regular admission, get another for half off on October 22.
-First 25 people pay half price regular admission on October 28.
-Family Day on October 31 between 3 and 6 p.m., when kids age 12 and younger can walk through, free of charge, with the lights on and trick or treat with the actors, who will be in friendly mode;
-During this three-hour period, families can also register early on-site for the 2016 Westside Baseball season or for a local Boy Scout troop.
-An on-site community blood drive (date to be announced soon): anyone who donates blood will receive a half-off regular admission voucher.
-A $3 off coupon (valid on select dates), found online at midnightterrorhauntedhouse.com.

Cerniuk promises that guests will get a great bang for their buck at Midnight Terror, which he says charges much less than other commercial haunted attractions - in fact, admission is as low as $9 after some of the aforementioned discounts. For those who want their chills without the wait, a V.I.P. pass provides fast entry. 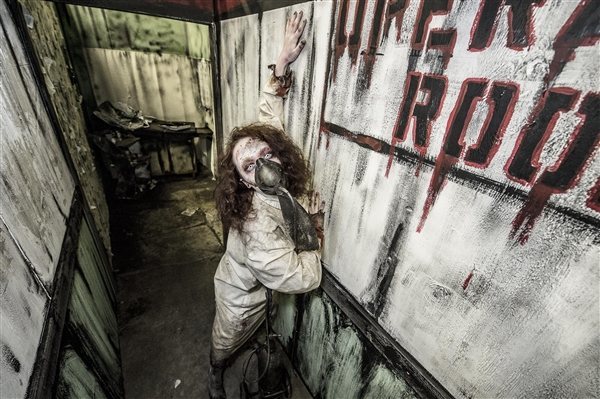 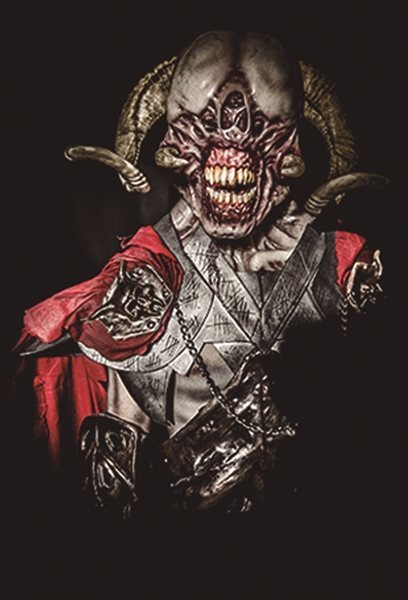 Malum is a demonic dream-haunting overlord who runs a fiendish factory, one of two attractions included with admission at Midnight Terror. Source: Midnight Terror 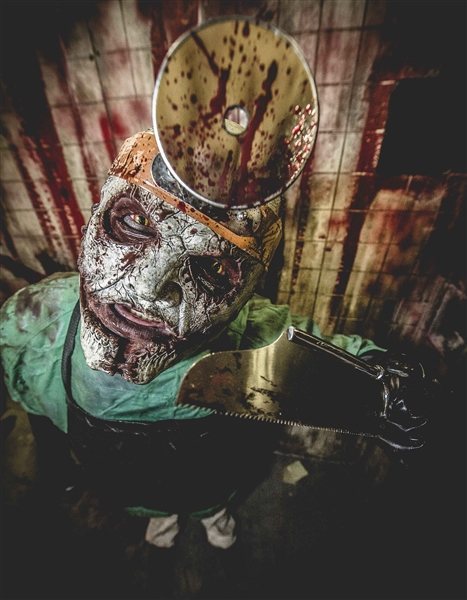 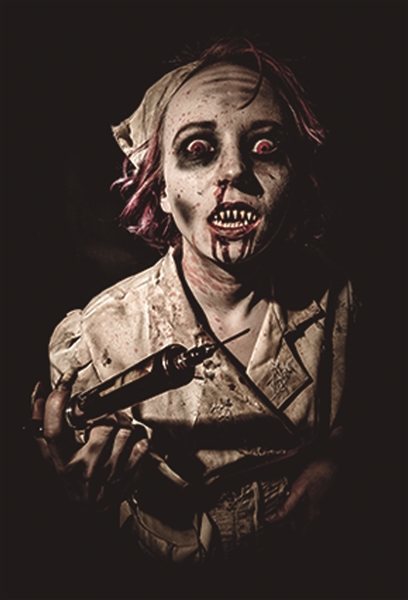 "Needles" is the name of the head nurse at Blackwood Hospital, one of two attractions included with admission at Midnight Terror. Source: Midnight Terror 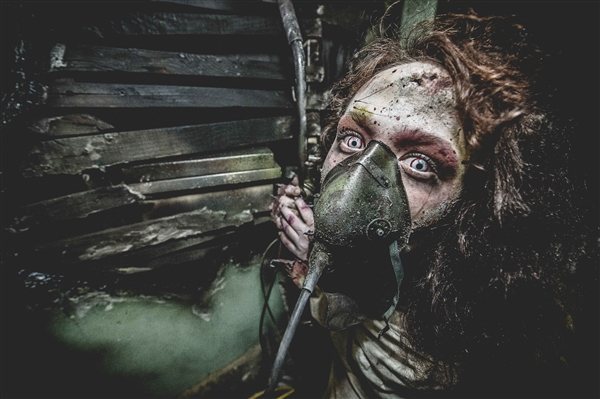 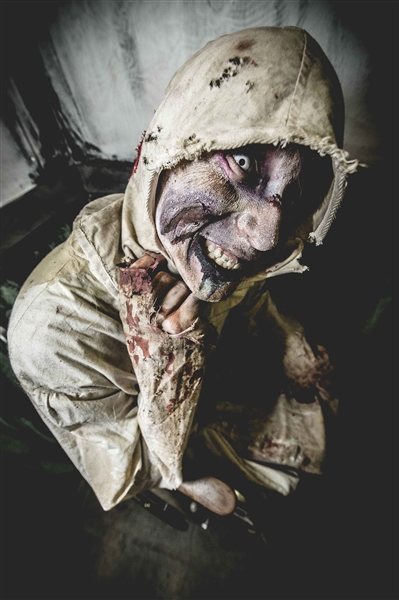